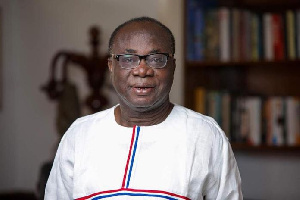 The National Chairman of the New Patriotic Party (NPP), Freddie Blay, has expressed worry over the opposition party’s deliberate attempts to disrupt the peaceful ongoing voters registration exercise with ethnocentrism and needless exaggeration.

According to him, the National Democratic Congress (NDC) has adopted new strategies dubbed “ethnic disenfranchisement” as their last card after they failed to disrupt the ongoing voters registration exercise.

“The NDC is desperately trying to undermine the simple and peaceful exercise of voters’ registration into one of ethnocentrism, outright fabrications, needless exaggerations, and old fashioned fear-mongering propaganda and inferior communists tactics. It has not been very smooth, I must say, but the Electoral Commission, the only institution with sole authority to determine elections has had to prove its mantle over and over again in these past few months ” Fredie Blay said at a press conference here in Accra.

He has however appealed to Ghanaians not to allow themselves to be used as political pawns to destroy the exercise which the Electoral Commission has so worked hard to roll out.

“We are calling all Ghanians especially the Volta Region where they have particularly targeted, not to allow themselves to be used as political pawns in a dangerous political game by desperate John Dramani Mahama,” he added

Coronavirus has created jobs for the vulnerable – Ministry of Gender