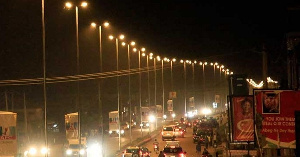 Street lights on a road stretch

The Minority in Parliament is demanding the Minister of Energy, John Peter Amewu, to account how much the country collected and used by the Ministry in relation to street lights and the fraction utilised in 2018 and 2019.

The Member of Parliament for Adaklu, Kwame Agbodza, who doubles as the Ranking Member on the roads and transport committee of Parliament said the Minister needs to account for the public.

He said there are street lights deficits yet monies are still being paid in that regard.

“In total, about GH¢273 million was collected from that. An amount of GH¢83 million and over was transferred to the ministry and then they could only use GH¢64 million.

“There is a variance of close to GH¢20 million which the Ministry received yet could not account for,” he said.

He said “Is it not high time you decentralize the maintenance of streetlights so that for instance that GH¢20 million that is unused can be transferred to all the district assemblies that have street lights so they could do the maintenance?

John Peter Amewu “It will be a better way of creating jobs for the young people in those communities rather than centralising the procurement and maintenance of streetlights where one or two companies mostly stationed in Accra carry out the maintenance.”

John Peter Amewu, responding to the MP said although over GH¢273 million was collected for the Public Lighting Levy between 2018 and 2019, only GH¢64 million was transferred to the Ministry for the purpose of fixing and maintaining street lights adding that “a total of GH¢273,876,832.16 was collected.”

He further stated that out of the amount collected, GH¢83 million was transferred to the Ministry of Energy but not all the funds were utilised.