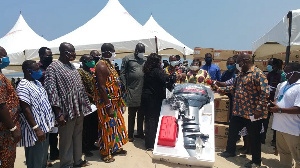 The outboard motors which are intended to enhance their fishing business

Fishermen in the Greater Accra Region have received 300 Yamaha outboard, at subsidized prices, from the Ministry of Fisheries and Aquaculture Development (MOFAD) to boost their fishing expedition.

The outboard motors which are intended to enhance their fishing business were procured through a collaborative effort between MOFAD and the Coastal Development Authorities (CODA).

Minister for Fisheries and Aquaculture Development, Elizabeth Afoley Quaye, said the distribution is a clear demonstration of government’s commitment to improving the fisheries sector.

She enumerated government intervention for the sector such as construction of landing sites in some coastal areas, abundant supply of premix fuel, provisions of ahotor oven to fish processors and the current distributions of chest freezers and outboard motors and many more inputs to enhance their fishing activities efficiently.

The sector minister also urged them to also contribute towards the sustainability of the sector by putting a halt to illegal fishing methods and rather adopt acceptable fishing methods.

Greater Accra Regional Minister, Ishmael Ashitey, indicated that more of the outboard motors will be distributed in due course as 5,000 are to be distributed nationwide.

Chief of Ningo, Nene Kanor Atiapa III, who is also the acting president of Ningo Traditional Council commended government and MOFAD for their timely support towards the fisheries sector.

The ceremony was graced by chief fishermen from the various landing sites, chief executives from Tema, Kpone, Ningo-Prampam, Ada East, and Ada West Metropolitan, Municipal and District Assemblies, members of the National Fish Processors and Traders Association (NAFTA), traditional rulers and among other relevant stakeholders.