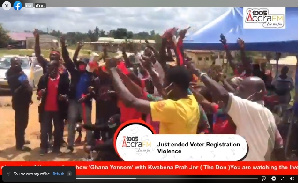 Some youth of Teshie in the Greater Accra Region, on Tuesday, August 11, 2020, clashed with police officers at who were enforcing a ban on mass-gathering activities in connection with this year’s Homowo festival, as a result of the COVID-19 pandemic.

Already, Teshie Mantse, Gbetsoolo Nii Ashsitey Akomfra III, had served notice that the LEKMA Municipal Security Council (MUSEC) has placed a temporary ban on the festival in the area.

However, he said in a statement that “the traditional authorities will be allowed to carry out some of the very essential rites for the period”.

Therefore, he said, the annual ban on drumming and noisemaking will come into full force on Monday, 10 August to Saturday, 5 September 2020 “but there will be no outdoor Homowo activities throughout the entire period”.

“All traditional leaders are, accordingly advised to confine the sprinkling of kpokpi to the ancestral houses only”, the statement said.

Despite the ban, hundreds of enthusiastic youth of the area mass up Tuesday morning for their ‘jama’ parade, which is a constant feature of the festival, reporter Samuel Thompson told Kwabena Prah Jr on Accra100.5FM’s morning show Ghana Yensom.

They hurled stones at the police during the melee with some of them threatening to spray them with faecal matter.

Second wave results of Ghana Election Poll to be released from Aug. 26