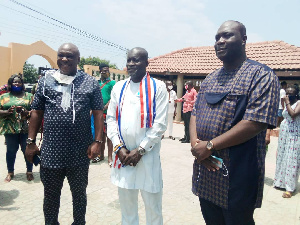 The Deputy Transport Minister and MP for Tema East, Nii Kwartei Titus Glover, on Wednesday, August 14, 2020, led a high powered delegation to the Tema Traditional Council, to beg for forgiveness, on behalf of the MP for Tema West, Carlos Kingsley Ahenkorah, who was declared by the Council as ‘persona non grata’.

The Tema West MP, who was part of the delegation, begged for leniency, promising not to repeat any act of indiscipline to the Council.

The high powered delegation to the Tema Traditional Council, which was led by the Tema East MP Titus Glover, together with the NPP Parliamentary Candidate for the Tema West Constituency, Yves Nortey, as well as some Constituency and Regional Executives of the NPP, was to plead on behalf of former Trades Minister and MP for Tema West Carlos Ahenkorah, who was declared persona non grata by the council days ago.

It would be recalled that the TTC during a visit by the First lady to the Tema Mantse palace, revealed plans to bar the former trades minister from visiting the palace or campaigning on their soil.

However, Carlos Kinsley Ahenkorah on Wednesday morning in the company of his colleague MPs begged the Tema Traditional Council to forgive him for acts of indiscipline he might have committed knowingly or unknowingly.

The Warlord for the Tema Traditional Area, Nii Shipi Armah Sompunu II, who accepted the apology on behalf of the council, sounded a warning to persons who do not respect the authority of the council, to desist from that or face their wrath

In a related development, the NPP Parliamentary Candidate for the Tema Central Constituency has formally been introduced to the Tema Traditional Council, after his victory in the party’s primaries last month.

Yves Nii Noi Nortey who presented an undisclosed sum of money and other items to the council in support of the Tema Homowo festival. He pledged to work hard and improve the fortunes of the party

Meanwhile, a book of condolence opened in the memory of the late Tema Mantse, Nii Adjei Kraku II, is expected to be closed in the coming days.