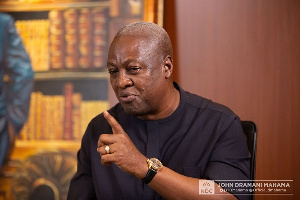 The flag bearer of the National Democratic Congress (NDC), Mr John Dramani Mahama, has reiterated his pledge to pay assembly members if he wins the upcoming 7 December 2020 presidential race.

Mr Mahama said the endless duties of assembly members, particularly as the first port of contact in most communities, require that they are financially supported to enable them to perform those tasks.

Speaking at a meeting with the Civil and Local Government Staff Association, Ghana (CLOSAG) in Accra on Thursday, 12 August 2020, Mr Mahama allayed the fears of sceptics, saying it is possible to remunerate assembly members by cutting down the size of the central government, reducing the number of ministers and the privileges they enjoy and channelling those resources to assembly members.

The former President observed that the progress made in decentralisation has been rolled back in the last three-and-a-half years, following the government’s bastardisation of both the civil and local government service.

He said the government has assisted in the hijacking of the work of the civil and local government service by political assistants, adding that recruitment and promotion is no longer based on merit as a result of interference from the government.

Mr Mahama said he is committed to the local government process, adding: “it is only through decentralisation that we can see true progress in the country”.

PNC will be more attractive under my leadership – Awingobit