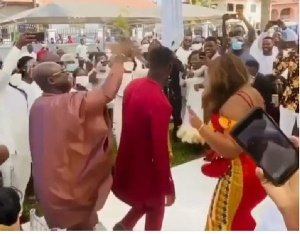 Some gospel musicians who were guests at Joe Mettle’s wedding have caused a stir in a video. These stars were seen showing off their wealth as Joe Mettle and his wife shared their first dance.

Joe Mettle and Salomey Selassie Dzisa tied the knot in a traditional marriage on August 13.

Nevertheless, videos from the traditional marriage of award-winning gospel singer Joe Mettle and Salomey Dzisa are currently trending on social media in Ghana. A video sighted by zionfelix which is fast going viral is the couple’s first dance that saw the gospel star challenge his wife to a dance battle.

However, during the battle, however, gospel music celebrity friends including SP Kofi Sarpong and others, splashed cash on their colleague as he showed off his moves.

Moreover, Joe Mettle showed his fun for the first time on the dancefloor as he exhibited many dance moves from Shaku Shaku to Zanku while the Bo No Ni singer gave his wife a run for her money on the dancefloo.

The dance floor area was crowded with many people trying to catch a glimpse of the side of Joe Mettle they had probably never seen being exhibited by the artiste.

Joe Mettle and his wife danced gracefully as the excited crowd cheered them on with the paparazzi also capturing the moment on phones and digital cameras.

Wait on the Lord – ‘Kyeiwaa’ shares testimony of her marriage