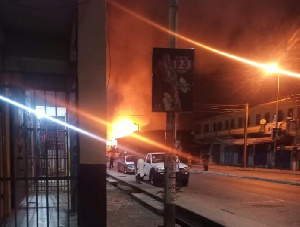 A radio station as well as shops have been ravaged

A warehouse and other properties close to the central business district in Takoradi have been razed down by fire, destroying dozens of properties.

According to some eyewitness accounts, the cause of the fire, which started around 1 am on Saturday, August 15 is yet to be established.

Empire News’ Emmanuel Ohene-Gyan reports that the warehouse which is close to the UBA Bank market circle branch belongs to a popular supermarket in Takoradi.

The eyewitness further added that a radio station and other shops operating in the area have all been affected by the ravaging fire.

“It will be very difficult for the supermarket to salvage something from the warehouse considering the state of the ravaging fire”, he told Ohene Gyan

The ravaging fire comes just a day after the confirmation and swearing-in of the new Mayor for Sekondi-Takoradi Metropolis, Abdul Mumin Issah.

As at 2am, the personnel from the fire service were still struggling to put off the fire amidst distractions from some residents.

“I cannot estimate the cost of things destroyed now but definitely, people’s capital are gone,” he said.