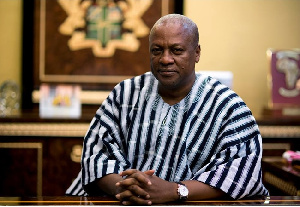 Flagbearer of the opposition National Democratic Congress (NDC) John Dramani Mahama has called on the Chiefs and people of Akyem Abuakwa, Akyem Kotoku and Akyem Bosome bluff, after they issued a one-week ultimatum to him to retract and apologise for the “Akyem Sakawa Boys” tag.

The angry indigenes threatened that without an apology, they will ban the NDC from campaigning on any Akyem land.

According to the chiefs and people who gathered to demonstrate at Asamankese on September 9, 2020, ethnocentric statements from the NDC and its leaders have a tendency to plunge the nation into chaos if not condemned by all Ghanaians.

But commenting on the issue in an interview on Class FM Monday monitored by Kasapafmonline.com, ex-President Mahama stated that he’s unfazed by a threat of a ban as that is impossible.

“Nobody bans anyone from going anywhere…we shouldn’t go there because if other people say they are banning other people what kind of country are we going to have. I have not said anything…I have not abused Akyem people. Like I said there are many Akyem people in my party why would I say anything insulting to them.?

The write-up was shared on John Mahama’s Facebook page.

Commenting further, ex-President Mahama stated that his mind was on the body of the argument made by Hon. Adongo hence his reposting it.

Asked whether he didn’t see ‘Akyem Sakawa’ in the post he responded: “It didn’t come to me as anything that I thought about, I saw his post I just reposted it. For me, it was the arguments he made there that were very cogent that’s why I reposted it.”