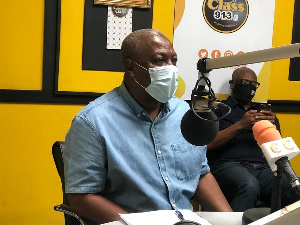 The flagbearer of the biggest opposition National Democratic Congress (NDC), John Dramani Mahama, has indicated that he does not condone ethnocentrism and thus, will not speak ill of anyone because of their ethnicity.

In an exclusive interview with Benjamin Akakpo on Class 91.3FM’s Executive Breakfast Show (EBS) on Monday, 14 September 2020, John Mahama explained that he only shared a Facebook post put out by the Member of Parliament for Bolgatanga Central, Isaac Adongo, because he made some “cogent arguments” regarding the Agyapa Royalties deal.

According to the former president, he has “never ever discriminated or talked to somebody based on their ethnic origin.”

On the issue of Akyem youth groups banning him or the NDC from campaigning in the area, he stated emphatically that: “Nobody bans anybody. Let’s not even go there because if other people ban others, what country are we going to have?” adding that: “I have not abused Akyem people. Indeed, like I said, there are many Akyem people in my party so why will I say anything insulting to them?”

In the article, Mr Adongo described President Akufo-Addo and some government officials as ‘Akyem Sakawa Boys’ and accused him of forming a family-and-friends cartel to capture the mineral resources of the state.

A group calling itself the Concerned Citizens of Akyem in the Eastern Region, after its demonstration on Wednesday, 9 September 2020, gave Mr Mahama a 72-hour ultimatum to apologise to Akyems or stay away from campaigning in any of their jurisdictions over such comments.

However, another Okyeman Group, Progressive Akyem Citizens, countered the claims made by the Concerned Citizens of Akyem.

According to the Progressive Akyem Citizens, the actions of the other group is shrouded in “misguided emotionalism and unhealthy political infiltration.”