The 92-year-old politician, once known for his autocratic ways, becomes the world’s oldest prime minister.

Malaysia’s former prime minister Mahathir Mohamad claimed election victory for the opposition coalition in a stunning comeback to politics 15 years after his retirement.

At 92, Mathathir now becomes the world’s oldest prime minister after he is sworn in again on Thursday.

Mahathir served as Malaysia’s prime minister for 22 years from 1981 to 2003, overseeing the transformation of the country from an economic backwater to one of Asia’s leading economies.

He is known as the father of Malaysia’s modernisation, and he steered the country through the Asian crisis of 1998, turning it into a so-called “economic tiger”.

As prime minister, he also presented himself as the spokesperson of the Muslim world following the September 11 attacks in the United States, and he supported the US-led “war against terrorism”.

Mahathir broke away from the ruling party United Malaysia National Organization (UMNO) in 2016 to join the opposition alliance.

He was determined to depose his former political protege Najib Razak, who had been prime minister since 2009 and sought a third term in office.

Najib was under pressure after being accused of fraud in a multi-billion dollar state fund. He has denied the allegations.

‘Going to the dogs’

In an interview with Al Jazeera’s Mehdi Hassan in 2016, Mahathir said he decided to turn against Najib because he had “gone off track”.

“He has done a lot of things, which are actually wrong. And as a result he has put the country in a very bad position, economically, politically. He is also getting a bad name throughout the world. So he has to go,” he said.

Commenting on Malaysia’s future, Mahathir added, “If Najib is there, this country will go to the dogs.”

The 92-year old’s return to politics gave a new lease on life to the opposition alliance, which had floundered since its leader Anwar Ibrahim was jailed for sodomy on what his supporters said were politically motivated charges.

But Mahathir was once criticised for deploying the controversial security law known as the Internal Security Act. His critics said it permitted him to crack down on the media, activists, religious leaders and political opponents, including Anwar, who in the past had accused him and his family of corruption.

Mahathir sacked Anwar as deputy prime minister and he was later jailed.

In recent weeks Mahathir acknowledged the suffering of Anwar and his family.

“I know how Anwar feels. It was during my administration that he was sent to [prison]. It is not easy for him to accept me and shake my hand,” The Malaysia Insight quoted Mahathir as saying.

“And it’s not just Anwar but his family as well who felt pressure when he was jailed. They suffered for 20 years.”

Anwar’s wife, Wan Azizah, is now part of Mahathir’s coalition and ran alongside him for deputy prime minister.

The opposition alliance has said it plans to pardon Anwar and install him as prime minister.

UMNO, the former ruling party in the Barisan Nasional coaltion, accused him of political “opportunism”.

Now that Mahathir is in the opposition, the tables turned against him.

Just days before the election, Malaysian officials launched an investigation against him over concerns he may have breached a new anti-fake news law.

On April 27, he had intended to travel to Langkawi – some 30km nrothwest of the mainland – to file his candidacy for prime minister.

Prior to take-off, however, the plane’s pilot discovered some damage to the aircraft, which resulted in the flight being cancelled. Mahathir called it “sabotage”.

A subsequent government-ordered investigation into the incident, carried out by Malaysia’s Civil Aviation Authority, found no indication of sabotage, instead concluding the aircraft had been unable to fly because of a minor fault on one its wheels.

Azharuddin Rahman, chairman of the Civil Aviation Authority, described the damage as a “routine technical fault” following the probe.

“Allegations of sabotage against an aircraft are extremely serious, and could impact the reputation of Malaysian aviation and the country as a whole,” Azharuddin said. 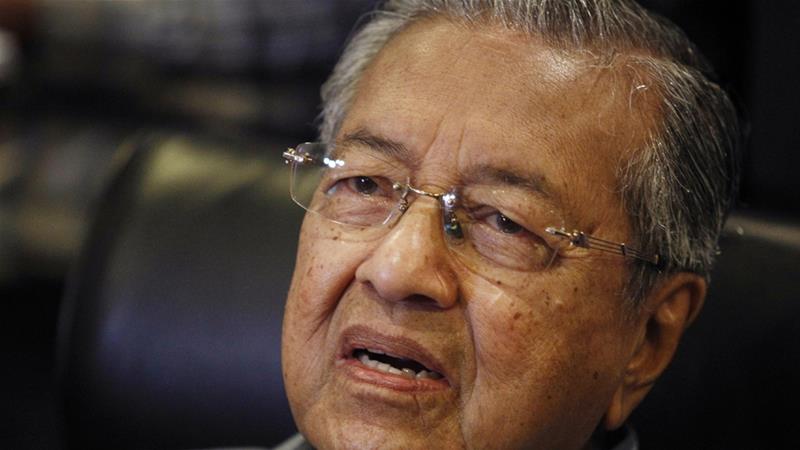